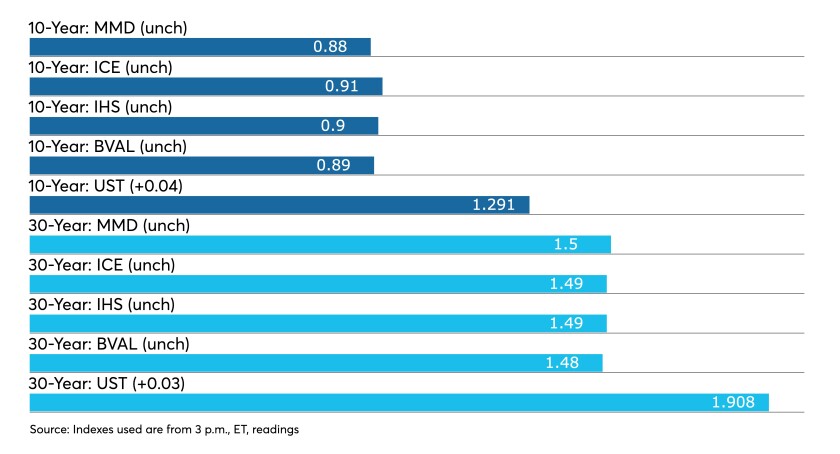 Municipals were little changed in uneven trading, even as U.S. Treasuries lost ground and equities saw another day of gains.

The primary market was the focus on Tuesday. Illinois saw its spreads tighten further on its competitive junior sales tax bonds — plus-39 in 10-years with a 4% coupon — while Montgomery County, Maryland, general obligation bonds were bought a few basis points above triple-A benchmarks.

Traders in particular are not surprised at how easily new issues — particularly sought-after specialty state paper such as New York and lower-rated, higher-yielding issuers such as Illinois — have been placed in the primary.

“We’ve got a nice mix of credits and ratings to work with to close out August” a New York trader said. “The fundamentals do not hurt. I don’t care where the money is coming from or being directed, the story of this year since early spring really has been those large mutual fund complex inflows.”

“I just think the market is content to end this up-and-down summer (for markets outside munis) on steady footing,” the trader said.

Roberto Roffo, managing director and portfolio manager at SWBC Investment Company, noted the demand for new issues “remains robust as there is still a significant amount of cash on hand due to the strong inflows we have seen all year.”

“I do believe the end of summer doldrums have had an effect on the market lately and has been the main reason for the relatively calm market,” Roffo agreed.

Between the cash inflows, dividend payments, and bond redemptions, the market is still in a net negative supply environment, which should support municipal bonds for the time being, according to Roffo. “Municipal bond ratios to Treasuries are also off their historic lows and approaching their one-year average, which should also help support the demand for munis going forward.”

“The levels of re-investable cash are high and quite often add to the supply imbalance that peaks in the summer,” he said. “While primary-market sales have been fair, secondary trading hasn’t been as robust. In fact, the trading data for municipals looks especially worse vs. prior years and supports anecdotal evidence of slowness across many trading desks.”

“While that seems like a large amount, it pales in comparison to the similar period’s $145 billion in 2020 and $161 billion in 2019. In fact, this August marks the lowest par volume of the past five years,” he added.

In late trading, Treasuries were softer as equities traded higher.

The markets will be watching for “further detail on how the Fed is measuring progress toward its inflation and employment goals, and for hints on its taper intentions,” said Wilmington Trust Economists Luke Tilley and Rhea Thomas.

The markets expect tapering to begin between November and January, with an announcement a month or two before it begins, said Jake Remley, senior portfolio manager at Income Research + Management.

“The risk that it’s delayed to late 1Q 2022 or beyond has dropped meaningfully over the past four weeks given the steady drop in continuing unemployment claims as well as firming core CPI even as the COVID-19 Delta variant spreads,” he said.

Although, given the emergence of the “Delta variant, the Fed may want to see August employment and inflation data, released in the first half of September … before really firming up its plans. So, I doubt the Fed will give us much on the taper this week at Jackson Hole.”

So with no clarification on tapering, Remley will be watching for “any evidence on a rethink with regards to full employment,” given “the disconnect between high unemployment and very high job openings.”

But, it’s not just inflation and employment, noted Jason Tzitzouris, strategas chairman, and Ross Mayfield, chief investment strategist at Baird Private Wealth Management. The debt ceiling, the fiscal 2022 budget and the possibility of tax increases will all play a part in Fed policy, they said.

“The Fed has to be cautious in their communication here because if the market prices-in rate hikes just as the impact of the fiscal drag hits, 2022 could be another lost year where economic growth underperforms potential and inflation expectations deflate in a way the Fed does not want,” Tzitzouris and Mayfield said.

Of course, the Delta variant is a wild card, causing an increase in cases, hospitalizations, and deaths. But uncertainty can go either of two ways, said Grant Thornton Chief Economist Diane Swonk, depending on whether it disrupts supply chains or demand more.

If it affects supply chains more than demand, inventories would “rebuild more slowly, while inflation persists at higher levels for longer,” she said. “This would force the Federal Reserve to be more aggressive in tightening to curtail unwanted inflation.”

But if it leads to lesser demand while not hitting supply chains, “this would prompt firms to rebuild inventories much faster than expected, alleviating the upward pressure on prices and forcing the Federal Reserve back to the sidelines for even longer.”

In data released Tuesday, new home sales rose to a 708,000 seasonally adjusted annual rate in July from an upwardly revised 701,000 in June, first reported as 676,000. Economists polled by IFR Markets expected a pace of 690,000 sales.

Sales are down 27.2% from the 972,000 pace of a year ago. The median and average sales prices both gained in the month, while the supply of homes also increased.

Fluctuation continued in the employment read, with the full-time employment index dropping to 8.2 in August from 24.8 in July, when it rose 21 points.

The prices indexes both slipped, but remain elevated.

The Federal Reserve Bank of Richmond’s service survey showed a slowdown in growth as well, as the revenues, demand and local business conditions indexes all were positive, but below July’s levels.

The employment index and the price indexes all rose.

The Richmond Fed manufacturing survey also showed growth slowed in August, with the manufacturing, shipments and volume of new orders positive, but lower than July’s figures.

The employment index halved to 18 from 36, while the prices paid was slightly down and prices received climbed.