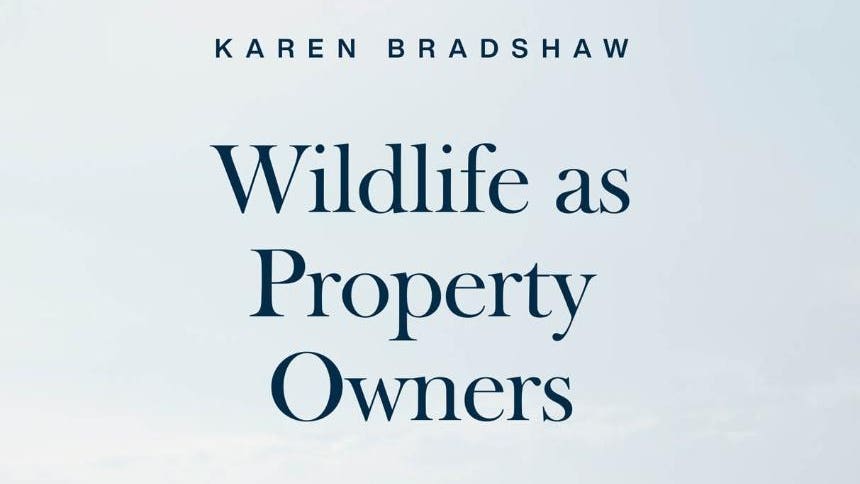 Wildlife has always shared the landscape with people, but the big loser in this arrangement is — and always has been — wildlife. Is it time to grant wildlife legal ownership of their homes?

Ships and corporations have owned property for decades; why not bison?

Most modern American property laws originated from English laws that are hundreds of years old, and these laws do not allow animals to own property. According to Karen Bradshaw, a Professor of Law and the Mary Sigler Fellow at the Sandra Day O’Connor College of Law at Arizona State University, granting people a monopoly on property ownership has led to the current global disaster for all life. Basically, people seize wildlife habitat, strip it of its resources and ‘develop’ it, thereby driving biodiversity loss.

But if property law is the problem, it can also be the solution, argues Professor Bradshaw in her new book, Wildlife as Property Owners: A New Conception Of Animal Rights (University of Chicago Press; 2020: Amazon US / Amazon UK). In this fascinating and thought-provoking book, she proposes how We The People can use property law to fix human-caused problems so we can arrest the flood of biodiversity loss.

This argument is a game-changing expansion in current legal thought with regards to the human-animal bond and our relationship to nature. For the past 50 years, animal law has taken one of two approaches to protecting animals: animal welfare and animal rights. Those espousing animal welfare have focused on the well-bering of animals by working to improve how we treat farm animals and by outlawing animal cruelty. Animal rights advocates have followed a different path by working to award legal personhood to sentient animals.

But both approaches overlook wildlife because they only consider captive, domesticated animals and pets that are sentient. Instead, Professor Bradshaw is presenting a different argument in her thought-provoking book. She is not not proposing legal ‘personhood’ for wildlife but alternatively, she writes: “I am proposing a limited category of property rights — the kind of rights that law has long afforded to ships, corporations, children, and the mentally incapacitated. Under my conception, wildlife has the land it needs but people can still eat a burger or swat a mosquito.” (p. 4-5)

This proposal is not as radical as it initially sounds: property law has been expanded dozens of times in the past to accommodate new categories of property owners, from women to inanimate objects.

“Ships and corporations have owned property for decades; why not bison?” Professor Bradshaw remarked. She points out that including wildlife as property owners could have a variety of inadvertent benefits, particularly promoting an improvement in our relationship with nature because much of the human damage to the planet can be directly traced back to the legal and economic instruments that ignore nature and its resources.

Further, Professor Bradshaw argues, if We The People believe that the fate of humankind is inextricably interconnected with the fate faced by other living beings, we can and should change our laws to reflect this worldview. Giving wildlife the right to home ownership can provide a legal framework that could prevent the impending mass extinction of more than one million animal and plant species as predicted by UN scientists.

How would this work? Professor Bradshaw envisions the creation of legal-patrimonial ‘trusts’. With wildlife as the beneficiaries, the land would be managed by a human trustee, who would have a fiduciary duty to act in the best interest of the animals.

This is not a new idea in practice. For example, faced with the steady decline of salmon, The Yurok Tribe granted personhood to the Klamath River in California, in 2019, giving it the same legal rights as a human. Although this personhood status only applies to the portions of the river within the Yurok Reservation, it gives them the legal ability to protect the river from upstream polluters.

“Trusts are credibly well established throughout the United States”, Professor Bradshaw explained. “Courts, individuals and lawyers manage trusts on behalf of people who can’t manage trusts for themselves all the time.”

Trusts would avoid the dilemmas created by the legal personhood status inherent in the animal rights movement. Redefining property ownership to include wildlife could work in conjunction with other propositions. For example, wildlife property rights would operate alongside animal welfare and animal rights laws, conservation work would likely be easier to crowdsource and to crowdfund, and this approach may possibly attract bipartisan political support. Another benefit could be the rapid application of scientific findings to conservation and ecosystems laws.

Overall, Professor Bradshaw’s engrossing and meticulously researched book clearly explains the law and is accessible to non-specialists. It represents an essential step forward in how we think about and deal with the other species on this planet. Highly recommended.

Quiet start to week as large new-issues in the queue
3 Possible Solutions To Housing Booms And Busts
What bear market? This token is quietly making new highs, up 300% against Bitcoin in 2022
Judge lifts Trump’s contempt order in New York civil probe
Top Wall Street analysts stand by these stocks as the first half of 2022 wraps up