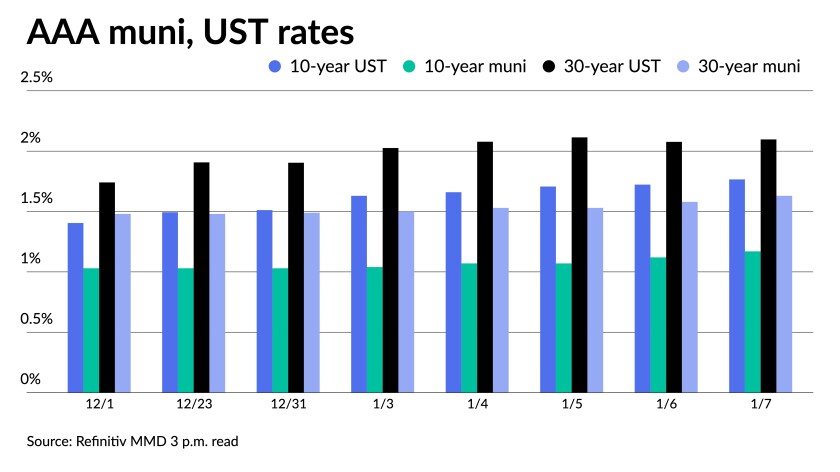 Municipals ended the week with another round of cuts to triple-A scales, moving yields higher by another five basis points, playing catch-up to the selloff in U.S. Treasuries.

Municipals followed UST weaker while stocks sold off after the December employment report, which was a lot to unwrap: the headline number missed expectations, but previous months were revised upward, the participation rate held steady and wages continued to climb.

Analysts believe the bottom line is the Federal Reserve will liftoff in March.

The market entered this year facing a new wave of the COVID-19 pandemic and a more hawkish Fed.

Going into 2022, some industry experts say it will be difficult for munis to match last year’s performance, and after this week, Barclays strategists said all signs point to a much harder year ahead for munis and most other fixed income asset classes.

Barclays strategists had expected some volatility in the first half of the year, especially in the first quarter, but many participants, themselves included, were taken aback by the extremely strong price action in the first week of the year.

“Investors seemed to be looking past the effect of Omicron and focusing on stronger economic data, including employment, coupled with December’s Federal Open Market Committee minutes, which have largely lived up to expectations following the shift to a hawkish stance in December, with risks to inflation outlook skewed to the upside,” they said.

Investors are now anticipating a considerably quicker pace of rate hikes based on the December minutes, with the first hike in March virtually priced in and 3.5 hikes priced in by the year’s last meeting in December, they said.

The meeting minutes also revealed that some members also called for a reduction of the Fed balance sheet shortly after the first rate hike, truly a surprise to the market, according to a BofA Global Research report.

“The swiftness and intensity of monetary policy in 2022 and beyond is likely to subject the market to more volatility due to imbalances in the economy, though more fiscal measures may help to ease some of the pressure,” the strategists said.

As the market reprices on Fed forecasts, BofA Securities’ strategists said Treasury yields have resumed their negative trend, with the 10-year yield hitting the high of 1.77% in 2021.

Despite the Fed’s aggressive stance, munis have remained robust, resulting in dropping ratios across the curve.

“We remain positive on munis’ January performance due to supply/demand and seasonal factors. While we expected January’s new issuance to be $36 billion, $8 billion of which should be taxable, given the new Fed posture revealed in its minutes and the upcoming Fed meeting on January 26, new issuance may come in lighter due to the uncertainty,” they said.

Historically, January has been one of the least active months for issuance, but one of the most active for fund inflows.

Principal redemptions and coupon payments are estimated to total $35 billion.

With so few significant deals in the market right now, the report said, benchmark index levels may not represent much. On average, January is a favorable month for municipal performance, and therefore, unless Treasury yields rise considerably from current levels, BofA Securities’ strategists expect January to be a good month.

However, Barclays said the current muni levels are not sustainable, and while they don’t expect an immediate correction in municipal valuations, they anticipate a 6% to 8% ratio adjustment along the whole curve over the course of the year.

“There has not been much selling thus far, but in our view, investors should be lightening up on their tax-exempt exposure to take advantage of the current market strength,” they said.

Conversely, they are also apprehensive about the prognosis for the tax-exempt market, believing investors may find more appealing options in the taxable space. Higher Treasury yields have typically aided spread products; the taxable muni index has tightened 2 to 3 basis points but is still 8 to10 basis points away from its October lows.

State GOs, leasing, industrial revenues, and utilities are among of the industries where taxable investors may still discover opportunity, they said.

Treasuries saw continued losses while equities ended in the red.

Parsing the jobs report
Nonfarm payrolls rose 199,000 in the month. Economists polled by IFR Markets expected 400,000 jobs to be added. Average hourly earnings jumped 0.6% and are 4.7% higher than a year ago.

The numbers “continued to show a positive but muddled picture of the labor market,” said Noah Williams, Manhattan Institute Adjunct Fellow, but it “suggests a tight labor market.”

“The December shortfall in employment should be seen as more reflective of labor shortages than a slowdown in hiring given the drop in unemployment and surge in wages,” said Grant Thornton Chief Economist Diane Swonk. “That said, those gains could be rapidly reversed in January in response to the spread of Omicron.”

The variant has caused widespread illness that has left many businesses short of workers, she said, and schools are “struggling to stay open.”

Overall, the report “affirms the Federal Reserve’s conclusion that the labor market has recovered,” Swonk said despite being 3.4 million jobs lower than February 2020 levels.

“A big deceleration in hiring will do little to change the Fed’s hawkish course,” said Edward Moya, senior market analyst at OANDA. “After the initial dust settled from the NFP report, expectations for a March Fed rate hike rose from around 74% to 80%.”

Bypassing the headline number, he said, traders are focusing on the 651,000 gain in the household survey. “The labor shortage problem is forcing employers to raise wages and with the unemployment rate improving to the best level since February 2020, the Fed can say the U.S. is at maximum employment,” Moya said.

BlueBay Asset Management Chief Investment Strategist David Riley, agreed. The “report will not derail the Fed from its recent ‘hawkish pivot’ to raising rates sooner rather than later, possibly as soon as March,” he said. Job gains remain “solid” the unemployment rate fell below 4%, and “the gains in average hourly earnings confirm that labor demand is strong and the jobs market is tight despite two and half million fewer people in the labor market.”

With the annual growth in wages, he said, and consumer price index growth likely higher than 7% “the Fed will be fearful that it is getting behind the curve in unwinding the extraordinary monetary support it put in place during the pandemic.”

But, as many have said through the years, one data point can be misleading. Ron Temple, head of U.S. Equities at Lazard Asset Management, said look past the headline and you’ll see “job creation in 2021 was the strongest in U.S. history at 6.4 million, nominal wage gains are strong at 5.8% for nonsupervisory and production workers, and despite labor strength, employment remains 3.5 million below pre-pandemic levels.”

Even those three data points offer somewhat of a mixed picture, he added. “While the first two points support Fed tightening, the latter should give the Fed comfort that it is not behind the curve.”

The payrolls data suggest “the labor market is even tighter than the consensus and the Federal Reserve think,” said Steve Chiavarone, portfolio manager and head of multi-asset solutions at Federated Hermes. “There simply is not the huge pool of workers waiting to jump back into the labor market that a lot of folks are hoping to see. We are at full employment, job gains are going to be more modest, and wages are going to continue to spike.”

Looking at wages and inflation data, both high “with no signs of deceleration on either end,” he said, “the Fed has to be at least somewhat concerned about a continued wage/price spiral. The supply chain constraints are certainly contributing, but wages tend to be the part of inflation that is persistent, sticky and not at all transitory. I would expect that this number will put further upward pressure on rates and bias the Fed in an even more hawkish direction.”

Indeed, Jay Hatfield, portfolio manager at Infrastructure Capital Advisors, believes “the Fed has lost control of inflation and will need to raise rates at least four times next year and may start quantitative tightening in 2022.”