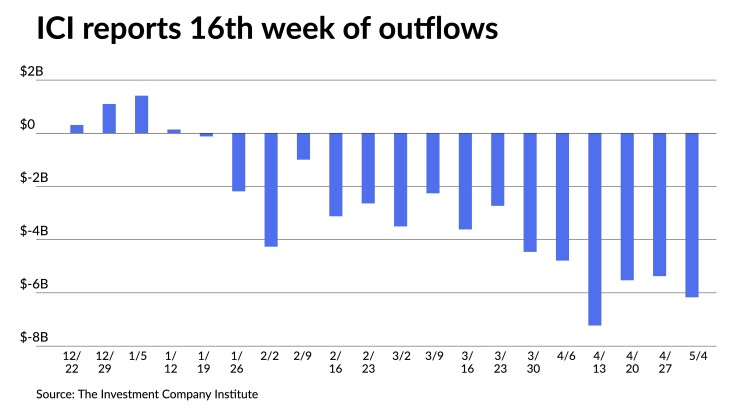 Municipals were weaker in choppy secondary trading while the primary market was active with several large new-issues pricing amid another swing in U.S. Treasuries, which ended the day at lower levels three years and out in a risk-off trade. Equities ended another day in the red.

Triple-A benchmark yields rose up to three basis points, while UST yields fell up to 11 on the long end after hotter inflation numbers..

Outflows continue with the Investment Company Institute reporting investors pulled $6.167 billion from muni bond mutual funds in the week ending May 4, up from $5.371 billion of outflows in the previous week.

In another active day in the primary Wednesday, Roosevelt & Cross priced for institutions $775.460 million of school districts revenue bond financing program revenue bonds for the Dormitory Authority of the State of New York with some cuts from Tuesday’s retail offering.

While municipals have not moved in lockstep with UST, and munis have not moved as dramatically as taxables, in secondary trading there is “implied wiggle room in almost all offers,” Olsan noted.

Trading flows show “modest shifts in demand developing as the one- and three- to seven-year ranges drew more dealer buys from customers than sells on a net par value basis,” Olsan said. ”Of course, these areas carry limited risk for dealer commitments given strong demand for defensive posturing. Overall, dealer inventories as last reported on April 27 showed a $13.4 billion total, up 20% over the last month.”

In addition to a supply/demand imbalance, absolute trading ranges have stymied better two-way municipal flows, she said, noting that in five-, 10- and 30-year munis this month yield spreads have been four to six basis points less volatile than their taxable counterparts.

“As a result, relative value ratios are 1-2 standard deviations off recent averages: the wings of the curve have implied 100% or greater ratios to USTs (in 5% coupons),” Olsan said.

Muni CUSIP requests fall
Municipal request volume declined in April, following a significant increase in March, according to CUSIP Global Services. For muni bonds specifically, there was a decline of 15.9%, and requests are down 12.3% year-over-year.

The aggregate total of identifier requests for new municipal securities — including municipal bonds, long-term and short-term notes, and commercial paper — fell 12.6% versus March totals. On a year-over-year basis, overall municipal volumes were down 13.5%.

Additionally, the city expects to sell $300 million of tax-exempt variable-rate demand bonds during the week of May 23, bringing the total bond sale amount to $1.38 billion.

Treasuries were better three years and out.

“There’s not much to reassure the Fed in this release, despite the slight decline in the headline and core inflation rates on a year-on-year basis in April,” said Brian Coulton, Fitch Ratings chief economist.

“April’s hotter-than-expected CPI print will do little to assuage the Fed’s concerns over inflation that FOMC members have described as ‘much too high,’ and likely reinforces the probability of 50 bp rate increases at the June and July FOMC meetings,” said Mickey Levy, Berenberg Capital Markets’ chief economist for the U.S. Americas and Asia.

It’s too early “to declare March a peak in inflation,” said Grant Thornton Chief Economist Diane Swonk. “There is too much uncertainty to go there given the ongoing war in Ukraine and ripple effects that lockdowns in China could still have on supply chains.”

But, taking a wider view, Wells Fargo Securities Senior Economist Sarah House and Economist Michael Pugliese noted, “restoring price stability was never going to be an easy task.” The report “served as a staunch reminder that the Fed has a long road ahead of it in bringing down inflation.”

And while base effects will help curb the annualized gains over the next few months, they said, “that will no longer be the case come mid-summer.” Expect a half-point increase at the June 14-15 FOMC meeting, House and Pugliese said, “with further hikes of that magnitude highly likely to follow.”

Although optimists may look at the report and say, “inflation has at least stopped getting worse … we doubt that it will be enough for the FOMC to signal a shift in tone. On an annualized basis the core CPI inflation experienced in April was still more than triple the FOMC’s 2% target.”

And while market conditions, in past hiking cycles, may have led the Fed to slow rate hikes, House and Pugliese said, “with the underlying trend in inflation still well-above what the central bank considers desirable, we think the ‘all clear’ signal remains a ways off.”

With the Fed looking for inflation to cool to 2%, AXS Investments CEO Greg Bassuk said, “this red-hot April CPI could spark an even more aggressive interest rate escalation, which is feeding investors’ trepidation about an impending recession.”

Besides Fed action, he said, the war in Ukraine and greater supply chain concerns with China’s COVID lockdown have investors worried about recession. Volatility will remain “through Q2 and beyond,” Bassuk said.

Still, some good news can be gleaned from the report, said David Kelly, chief global strategist at J.P. Morgan Asset Management. “We expect some further moderation in the months ahead.”

Supply chains will improve and economic growth will drop this year, he said. “This should provide inflation relief and consequently we expect that the Fed will gradually moderate its recently hawkish tone, despite today’s hotter-than-expected report, thus providing support for recently battered U.S. fixed income and equity markets.”

While the report was in line with some forecasts, ING Chief International Economist James Knightley said, “the market had been looking for a larger moderation with consensus forecasts of 8.1% for headline CPI and 6.0% for core.”

Plus, he noted, the drop in energy prices in April “will be fully reversed next month given gasoline is back at all-time highs.”

But, he believes, that “March 2022 will have marked the peak for annual inflation.” With used car prices — which carry a heavy weight in the CPI basket — declining, and a shift toward services from goods, expect “a gradual moderation in the rate of inflation,” Knightley said. “Nonetheless, we remain nervous about the impact from gasoline and the growing price pressures within services.”

Additionally, housing will remain a driver of sticky inflation, he added.

So, pressure remains for “aggressive rate hikes and the risks of a marked slowdown/recession.” Knightley sees 50 basis point hikes at the next three meetings and 25 basis point increases “from November onwards with the target rate peaking at 3.25% in early 2023.”

But despite the higher rates and some supply-side improvement, he said, “we have doubts that CPI will get back to the 2% target before the end of 2023.”

Don’t expect a deceleration in inflation until the fall, said Jay Hatfield, CEO and CIO at Infrastructure Capital Management, when energy prices will “peak and housing and rent price increases to decelerate.”

And it will be the Fed’s job to rein in inflation, said Morning Consult Chief Economist John Leer. ”In terms of the White House’s inflation proposal, it’s hard to see how that proposal will meaningfully change near-term inflation.”

While long-term inflation can be fixed at the federal level, “many of the obstacles preventing an expansion of affordable housing are at the state and local level,” he said. “I appreciate the political challenges that inflation poses to the White House, but I don’t think there’s a lot that they can do on this issue over the next few months.”

Puerto Rico Oversight Board wins one and loses one in appeals court
What Supply Chain Issues? Here’s Where You Can Buy Furniture Right Now
Terra (LUNA) 2.0 relaunches according to Do Kwon’s revival plan
Historic Housing Shortage Shows Signs Of Letting Up As Sales Decline
Munis better but still on track for worst year on record