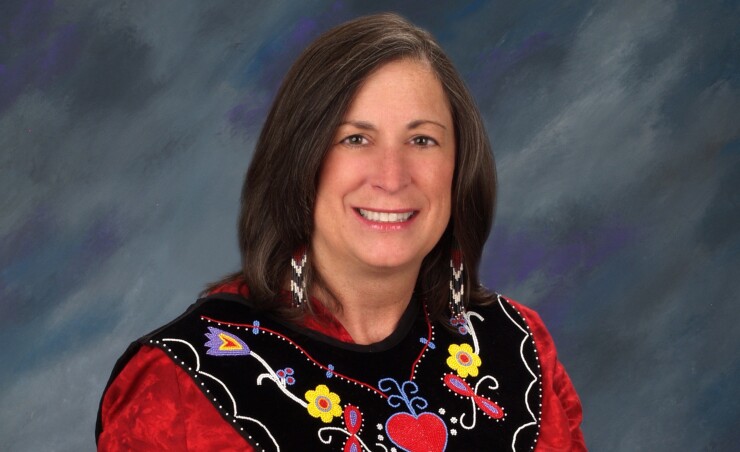 President Biden this week named the first Native American as U.S. treasurer after fielding complaints last year that the majority of the COVID-19 relief money set aside for tribal governments was going to the 28 wealthiest tribes.

Chief Mutáwi Mutáhash (Many Hearts) Marilynn “Lynn” Malerba was previously a member of the Treasury’s Tribal Advisory Committee and is lifetime chief of Connecticut’s Mohegan Tribe.

The office directly oversees the U.S. Mint, the Bureau of Engraving and Printing and Fort Knox, and is a key liaison with the Federal Reserve. Malerba will also serve as a senior advisor to the treasury secretary in the areas of community development and public engagement, the White House said.

Treasury’s inequitable distribution of recent COVID relief funding was a big part of why U.S. Sen. Alex Padilla, D-Calif., pushed for the creation of a dedicated tribal office within Treasury, according to a spokeswoman for the senator. It was clear that in-house expertise, as well as an empowered representative for tribal communities within the department was needed, she said.

“As Treasurer, Chief Malerba will bring extensive experience to guide the creation of the new Office of Tribal and Native Affairs,” Padilla said in a statement. “Her leadership will ensure that Tribal nations have a formal seat at the table where decisions affecting their communities are made.”

California has the largest number of tribes in the lower 48 states, with 109 distinct federally recognized tribal governments and a population of over 723,225 Native Americans, according to the senator’s office.

“I am honored and humbled by Secretary Yellen and the Biden Administration’s commitment to ensuring that all voices are heard by Treasury as we work together to create an equitable and just society,” Malerba said in a statement.

The inequities in federal relief allocations to the tribes were brought to light in July when four senators penned a letter to Treasury Secretary Janet Yellen.

Ron Wyden, D-Ore., Jeff Merkley, D-Ore.,Steve Daines, R-Mont., and Padilla had asked Yellen to halt the final $6.65 billion allocation of $28 billion in federal aid from ARPA and the CARES Act dedicated to tribal governments until after treasury came up with a better way of dividing the funds.

“We have received extensive comments from Indian tribes who are concerned that a pure employment-based distribution will not be effective in getting relief funds to where they are needed,” the senators wrote in the letter.

The initial $12.3 billion allocation based on tribal enrollment resulted in 90% of the allocation going to only 5% of the tribes, according to the letter. The formula meant that the 28 largest of the 574 federal recognized tribes received the bulk of the money, according to Tribal Business News.

“While that may accurately reflect the varying size of tribal populations, it should also make the Department sensitive to disparate outcomes for the remaining $6.65 billion in Fiscal Recovery Funds,” the senators wrote in the letter.

Their concern was that the largest, wealthiest and most self-sufficient tribes were receiving funding, while smaller tribes more greatly affected by COVID-19 were not.

Wyden, chair of the U.S. Senate Committee on Finance, advocated for a change in the formulas that Treasury had adopted. He also wanted greater representation by tribes in the decision-making process.

“When it comes to making sure that tribal communities are equitably served, there is always more work to be done. Nation-to-nation consultation is essential, and more Native Americans in U.S. government leadership is a must,” Wyden said. “The historic appointment of Chief Malerba in this key role at Treasury, as well as the creation of an Office of Tribal Affairs, will help make sure that the agency better upholds its obligations to all tribal nations.”

Wyden, the other three senators who signed the original letter, and Sen. Elizabeth Warren, D-Mass., had sent a follow-up letter to Yellen in October that led to the formation of the Office of Tribal and Native Affairs.

“The recent tribal consultations and interactions between Treasury and tribal nations underscore the need for sufficient, dedicated, in-house expertise at Treasury on tribal policy matters,” the senators wrote in the second letter.

The senators noted in their letter that Treasury’s role in matters, including tax and finance issues, that have seriously affected the welfare and sovereignty of some tribal nations, demonstrates the need for better representation. “This role has increased over time and has become extremely important during the COVID-19 pandemic, because Congress charged Treasury with crucial responsibility of disbursing to tribal nations billions of dollars of relief funds,” according to the letter.

“The Senator is hopeful that Chief Malerba’s appointment will help the department better understand the deep variance in Indian Country and foster accountability,” a Padilla spokeswoman said.

“Her leadership and experience will deepen our commitment to help expand economic opportunities for all Tribal communities,” Yellen said in a statement.

Malerba’s appointment could also result in changes that reduce the challenges tribal nations have issuing municipal bonds, said Matthew Gregg, a senior economist at the Center for Indian Country Development at the Federal Reserve Bank of Minneapolis.

“Chief Malerba was chair of the Tribal Treasury Advisory (TTAC) Committee, who in a report a few years ago, recommended the creation of a permanent Office of Tribal Affairs,” Gregg said. “Malerba (and the rest of TTAC) are very knowledgeable on the issues pertaining to the limited taxation powers of tribes and their ability to issue tax exempt bonds.”

Gregg wrote an article for Brookings in December outlining the challenges tribal governments face in accessing public finance tools that are readily available for state and local governments, such as subsidized borrowing and tax incentives to spur development.

It “effectively narrows the set of eligible projects to those typically financed through tax revenues, and it prohibits the use of tribal private activity bonds,” Gregg said.

“The essential government function requirement, which was added to the federal tax code in 1987, was in response to purported abuses of tax-exempt debt by tribes,” he said. “Some tribes used tax-exempt debt to finance commercial activities such as cement plants. Due to those ‘abuses,’ the tax code has been permanently altered.”

He added that tribal sovereignty had little do with the change to the tax code.

Many tribal nations also struggle to find revenue they can use to support bonds, because their public land falls under a trust and can’t be taxed and the private land owned by the tribes is taxed by nearby county governments and the money doesn’t come back to the tribes, he said.

The restrictions mean that while state governments were able to issue $47 billion in tax-exempt municipal bonds annually from 2014 to 2020, tribal governments only issued a total of $84 million annually, he wrote.

The federal government ran a pilot program called the Tribal Economic Development bonds program during the Obama Administration, which gave tribes access to a national cap of $2 billion to issue tax exempt debt just as state and local governments do. All but a small amount of the capacity has been tapped, Gregg said.

U.S. Sen. Lisa Murkowski, R-Alaska, proposed a bill that would double the size of the volume cap to $4 billion, but Gregg said what is really needed is a repeal of the 1982 tax code.

“The repeal of the essential government functions requirement in the IRS Code is the long-term solution to the lack of parity between tribes and other governments,” he said. “The TED bond program, while successful, allowed tribes to use tax-exempt debt to finance hotels, energy projects, and all large projects except gaming. However, the TED bond program is a short-term solution whose cap is subject to congressional approval.”

Yellen visited the Rosebud Sioux Tribe in South Dakota Tuesday to see how the $195 million received by the tribe from ARPA funds had helped. Treasury officials said it’s the first time a treasury secretary has visited a reservation. The money is going to build housing to deal with the lack of affordable housing on the reservation, according to Yellen’s release.

The visit was intended to spotlight the “disproportionate impact the pandemic has had on tribal communities and how the American Rescue Plan funds are supporting their recovery,” according to the treasury department.

“Those numbers are unacceptably high,” Yellen said in her remarks.